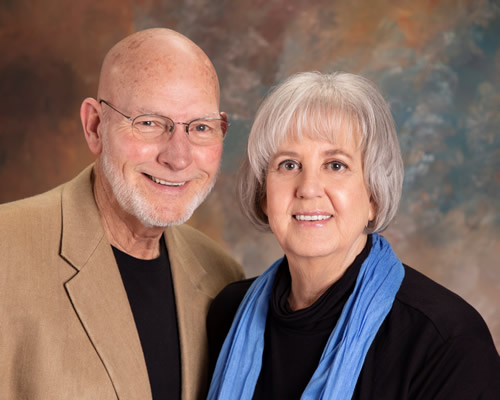 George and Rhonda Stewart are the first couple we have inducted into our Hall of Fame.  With a combined commitment of over twenty years to the Senior Wildcatter’s; it just seems fitting that they join our Hall of Fame together.

George was born August 25th, 1951, in Sterling Colorado.  Rhonda was born May 21st, 1952, in Evansville, Indiana; she and her family moved to Sterling, Colorado in 1962.  George Stewart and Rhonda Rideout met in Sterling Junior High, when George was 13. They quickly formed a bond that would stand the test of time. They were married on June 6th, 1970, three weeks after Rhonda graduated from high school, a marriage that stood strong for the next 52 years.  Over the course of their 52 years together, their family grew to include two sons, Kelly and Kevin; five grandchildren; and two great-grandchildren.

During George’s 46 years in the oilfield, he was a rough neck; driller; truck driver; shop hand; trainee fisherman; fishing tool supervisor for 15 years; District Manager over Casper WY, Dickinson ND, & Odessa TX, for 12 years; and Technical Advisor 10½ years.  Over the years, George trained many fishermen.  He put on fishing tool and casing exit training classes for customers, engineers, field personnel, college graduates, and petroleum engineers.  Many of these classes were at the Colorado School of Mines, and the University of Wyoming, and Montana Tech.

George enjoys spending time with family.  His hobbies include working in the yard on his lawn and flower beds.  Golfing is about George’s only other hobby currently.

Rhonda’s other passion besides family and crafting was the Paradise Valley Christian Church and wanted to be involved in the Imagine More Building Project for the new church. Rhonda wanted to be sure it was handicap-accessible; being confined to a wheelchair, she understood the shortcomings at the Church.  Unfortunately, Rhonda will not see this project completed; she passed away last month.

George has met and has made many wonderful friends during his career.  Throughout Rhonda’s life she was devoted to her family and always considered her family her first priority.